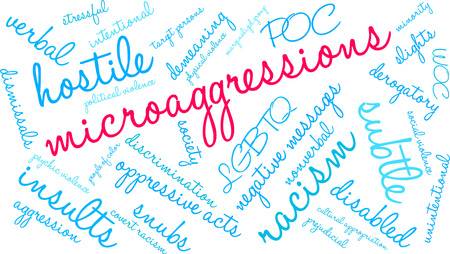 According to Merriam-Webster, a microaggression is “a comment or action that subtly and often unconsciously or unintentionally expresses a prejudiced attitude toward a member of a marginalized group (such as a racial minority).” The term was invented by Harvard University psychiatrist Dr. Chester Pierce, who coined the term back in 1970. There are three types of microaggressions: microassaults, microinsults, and microinvalidations. Columbia University psychologist Dr. Derald Wing Sue explains what each of these three types are. His descriptions can be found on sailingroughwaters.com.

There is no mistaking a microassault, for they are purposeful, obvious, and are usually physical microaggressions. Microassaults are usually committed by people who are either unknown perpetrators or are with a group of friends who can support their cruel acts. Microassaults consist of, but are not limited to:

When a white person in a car shouts a slur at a person of color who is walking down the street, then the white person quickly speeds away.
When a man in an office quickly gropes his female co-worker and laughs it off as a joke.
When an able-bodied person takes or knocks a cane out of the hands of a person who walks with a cane.
When a cisgender person gropes a transgender person’s crotch to “check” if they belong in the public restroom they are using.

Microinsults are more verbal than microassaults, and also the most common microaggression. Microinsults are subtle, disrespectful, and backhanded; most times it is hard to tell if they are even purposeful or accidental. Some examples of microinsults are:

When a straight person calls something “gay” to mean stupid.
A white person following a black person around a store.
When a man calls a woman “sweetie” or “baby” in a professional context.

Dr. Sue considers microinvalidations to be “the most insidious form of microaggression.” This form of microaggression occurs when a victim’s experiences of discrimination are called imaginary or fake. Most times it is unknown what the perpetrator is referring to, normally they do not even realize they are being rude and damaging. Often times microinsults leave the victim confused about whether or not it even happened or wondering if the situation that occured is their fault. Microinvalidations include, but are not limited to:

When someone tells you that you’re being oversensitive.
When someone tells you that if you were nicer, more respectable, or more polite, then people wouldn’t discriminate against you.
When you tell a friend about a microaggression you just experienced, and they tell you that you’re imagining things, or just reading into it too much.
When a corporation or government claims that the board of executives or officers is all-white and/or all-male not because of discrimination, but because everyone who was most qualified happened to be male and/or white.

More information can be found at http://sailingroughwaters.com.

Sadly, microaggressions seem to be a part of everyday life. However that does not make them right or okay. So if you have to deal with it, do not be afraid to seek help and stand up for yourself. You deserve every ounce of respect you can get, and do not settle for anything less.