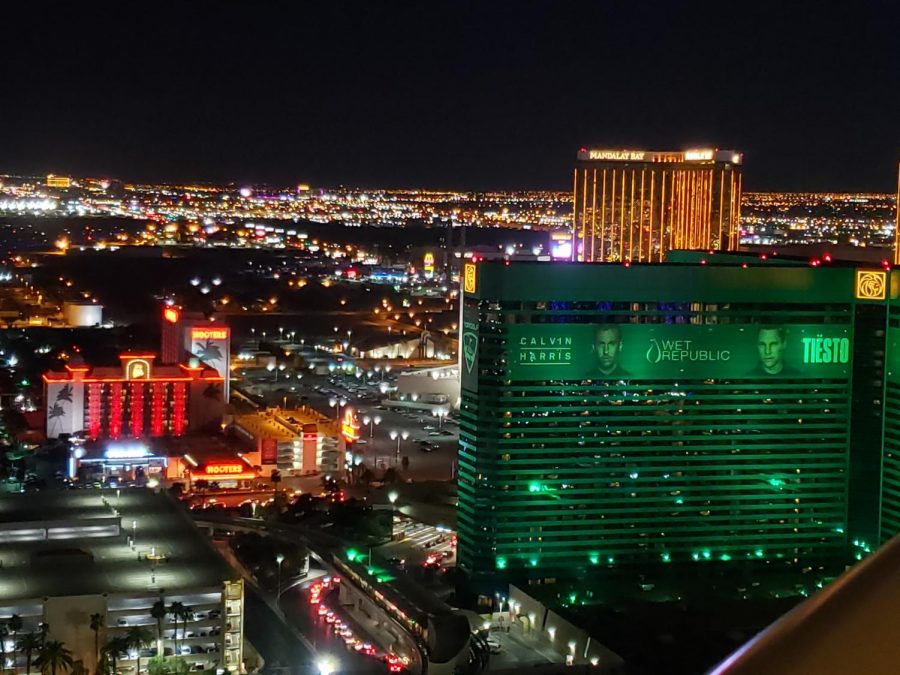 Over Spring Break, I had the opportunity to go to Las Vegas, and it was overall really fun; we left on the Tuesday of spring break week, and came back on Saturday. The flight was a little under two hours, and I spent most of it working on scholarships and homework. Doing this made me feel better knowing that I wouldn’t be too far behind when we got back towards the end of the week. We stayed at the Signature Hotel, which is part of the MGM Grand Hotel complexes (close to the airport) and we toured the hotel and casino the first night.

The first full day there for us was spent mainly at the pools, which had a big river pool and many other pools hotel residents could use. Later on in the day, we went to see Mat Franco, a really cool magician. To get there, we took the Monorail, a transit system that makes multiple stops, which was a pretty cool experience. When we arrived at the Linq Hotel, where he was set to perform, we were pretty early so we ended up eating at a restaurant called “Off The Strip Bistro and Bar.” I ate lamb chops and Gelato ice cream, which was probably one of the best parts of the trip.

The show was also amazing! He did multiple card tricks and the illusions were incredible! At one point, he appeared at the back of the room from the front of the room in about a second, and that blew us away.

The second day, we mostly stayed around the hotel and hung out at different malls and stores around the area. First, we walked on Fremont Street in downtown Las Vegas, and me and my Mom stopped to get a caricature (a drawing/cartoon of real life people and objects); it turned out pretty cool! We walked around the Strip later on, and we rode the High Roller, a ferris wheel on the Strip, and were able to see all the different hotels and casinos around Vegas.

Then, on our last full day there, we went back to the pool, and afterwards we went to see a play called, “Menopause the Musical.” It was even funnier than it sounds, and I really enjoyed it!

Overall it was an amazing experience and an awesome way to decompress over Spring Break. I’m grateful for the opportunity and hope that anyone who wants to go to Vegas (or anywhere in the world) gets the chance to!