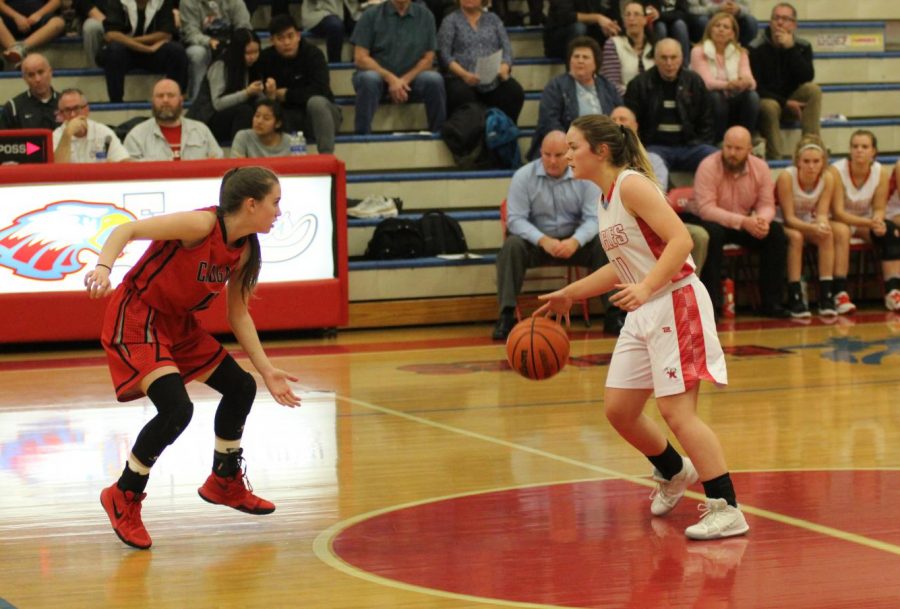 Sophomore Trinity Miller starts the offense in the team's first game this year against Mt. View.

Things picked up a bit for us the past two games as we beat Lincoln 39-37 as Domonique Andrews scored 17, then Jefferson 46-42 behind Ellie Basinski’s 22 points on 7-11 shooting.

Our goal now is to find some consistency as we are still not clicking on offense, but as we learn a bit more about each other and work our way into shape, we should start putting 45 points up on a regular basis.

I’ve always believed girls basketball games are won in three areas:  Layins, free throws and rebounds. If we don’t start taking better care of the ball in critical situations I’m going to have to create a fourth category:  Turnovers.

Turnovers are tough because we can’t defend the opponent when they are streaking for a breakaway layin.  Over my years at CHS I’ve been blessed with some pretty solid point guards who have been able to control the game and thus limit the turnovers, but this year’s team hasn’t found that groove, yet.

In the 90’s we had Jennifer Krum (’94), Annie Obrist (’97), Summer Gaylord (’98) and Amy Rispler (’01) for a long run of 1st team all-league caliber point players.  It was very difficult to pressure those kids into turnovers and the risk of trying to do so often ended up leaving an Eagle wide open under the hoop.  Those kids could make me look smart simply because they had the athleticism, experience and skills to do what needed to be done.

When I returned to CHS after a five-year absence we had Kelsey Khaw (’09), then Taylor Grote (’11), both of whom could control the game, albeit in different ways. Kelsey was an extremely smart player who learned to set herself up for successful situations; Taylor was explosive and even if she got herself in a bad situation could usually squirt through the trouble and find good things on the other side.

We played Canby in a playoff game we were absolutely not supposed to win in 2009. Canby was a highly-ranked team that put a lot of pressure on the ball and had cruised to a 20+ win season. Part of our game plan was to “let” Taylor get trapped, then, “Go like a scalded cat.” She was that quick; she simply could not be trapped. And we won that game in overtime in what long time Athletic Director Duane Brady (his picture is outside the gym) and now deceased coach, teacher and close friend Ken Moss called, “The single best game ever played at Centennial High School.”  Wow. Chills.

From 2012-15, we had the twins:  Melissa and Megan Dailey. Melissa was the point, Megan the shooter.  Melissa was so good we literally did not practice against a press for four years because she would make a team look foolish for extending out on her.

The difference between those kids and our current point guard situation is that they were all able to develop as 6th, 7th and 8th graders, so by the time they got to the high school they had played a lot of ball and had seen most defenses.   As I said last week Trinity Miller is a competitor and has the mentality to be really good, but there was no youth program in the district for a couple of years when she should/could have been improving, so she is learning on the job.

She will get there and improves each game, but the inexperience was evident Tuesday as Jefferson forced us into a nearly 30 turnovers. Trin only had six of these and we had two players with seven each, so she is in no way to blame, and that is not my point.

Instead I say this to let you know why I think we will get better throughout this season: We are seeing things for the first time and will learn how to adapt. (I hope!) At the beginning of last season we literally only had one player—Dom—who would dribble. Nobody else had the experience or skills to put the ball on the floor, and we were really shaky until we got some games under our belts.  While we are better this year, we are still developing and improving both individually and as a team. That’s what coaches mean when we use the term “chemistry.”

The point position is so important and takes so much time on the court, studying the game and working through situations that I’m going to share one more story about a former player.  I mentioned Krum earlier. She was gifted, but she was also a perfectionist. When I first got to CHS nobody in the high school wanted to play/practice outside the season, so I went to the middle school to build a team that could compete “in a couple years.”

Middle school girls are not ready for high school ball, but I threw this group into a full summer season because I had no choice. We were bad. Really bad! We only won one game that summer and it happened to be our last game against the Henley Hornets at Mazama High early one Sunday morning.  The kids were so excited to win they could have run home. But that’s not my story about Krum. Earlier that summer we were getting beat by 70 or so and the opponent (Oregon City) was still pressing us. The 8th grade Krum got picked clean at half court, turned and yelled at me, “Stanek, I DO NOT want to be a point guard anymore!”  Three years later she was all state as we ran through the league undefeated. It takes time. Even if you have the drive, it takes time!

Tonight we play a Canby team with two very good players.  Ally Odell scored 12 points per game last year and Nicole Mickelson averaged 15.  They are both long, athletic, savvy juniors. We have our hands full.

The game plan is simple.  Limit those two players and make someone else beat us.    The rest of their team is similar to ours: They have a lot of players who average a couple of points a game, but only the two mentioned who are in the double digit range.  Of the 43 or so points they averaged as a team last year, nearly 27 came from Odell and Mickelson.

We seem to play better on the road than we do at home.  I’m sure it’s nerves, and we need to overcome them in order to move forward as a team, but I think that will happen as we are starting to build some depth and as coaches we feel more comfortable subbing than we did just a couple of games ago, so if a player is jittery, we can sit her until she mellows out a bit.

We did this Tuesday at Jefferson. Ellie was horrible early—missed shots, turnovers, nerves. (She knows this. Don’t be shocked that we are honest with our players. If they are bad, we tell them. Sometimes with tenderness, sometime with a bit of a bite, but they will hear it.) So she sat a few minutes in the first quarter and returned to play the best offensive game she’s ever played.  It was nice to see her smile when it was over.

Another bright spot Tuesday was Charlotte Marcum.  She stepped in for Maggie Martine, who required a visit by paramedics at Monday’s practice and did not dress Tuesday.   Charlie played extended minutes and earned the chance to get into the rotation against Canby. She is a strong, physical kid who does not like to lose, and she brought a bundle of energy that was much needed at Jeff.  We would not have won without her, and now she knows the story of “Wally Pipp.” Just ask her.

Wednesday was a tough day for teammate Hadley Cook as she has determined she’s unable to continue playing ball due to her ACL injury last year.  (I wrote last week that she scared me when she played because I feared further injury and the possible loss of her upcoming softball season.) While she is able to move “north and south,” Hadley is not able to move backwards or laterally with confidence, and she had to change her approach to the game because she had a lingering pain and fear.

After a long talk, Hadley decided she should not continue with hoops. It’s admirable that she even tried, but it’s always hard when these events happen as each player is important to a team. We will miss Hadley, but completely understand and support her decision; she’s a great kid and we wish her nothing but the best and she’s welcome in our locker room anytime.