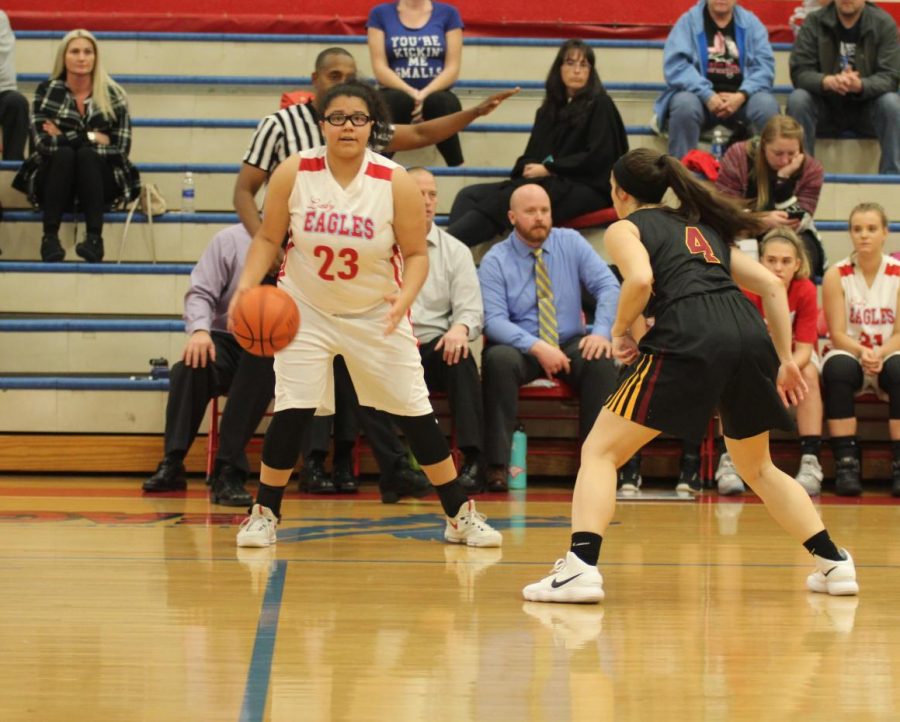 I’ve always wanted to write about my team, and have even contemplated writing a book about coaching girls basketball.

Since that hasn’t happened, I asked the newspaper staff if I could “cover” the girls basketball season this year. They didn’t object, so the plan is for me to follow the same deadlines as my students to inform you, in first person, about our season.  It may seem a little unusual, but I hope you will play along.

Today’s topic?  The players. Here’s a little insight into each of the full-time varsity players on our team.

Domonique Andrews, senior.  Dom leads us on the court. She started all 24 games last year and finished the season as an Honorable Mention all-league player.  She has started slow this year, but that will pass. (It better!) Look for her to average 12-15 points the rest of the way as we start to work our way into the season.  She can shoot the 3, and is adept and getting to the hoop to draw fouls and/or score. Last year she joined the all-time state record book by going 10-10 from the FT line in a game, and had another game where she was 15-16.

Maddie McHone, senior.  This kid is freakishly athletic and has won several State Track Hurdle Championships and will run for someone in college on a scholarship.  To be honest, I was thinking she might not play her senior year because basketball is a secondary sport, but she’s never wavered and brings a bundle of relentless energy every day.

Maddie is one of those kids who could successfully strike a golf ball, throw a dart or swing a bat at a high level, even if she’s never tried those things before. She’s that gifted. She had 13 in the game at Forest Grove Tuesday—five layins and a 3 pointer.

Hadley Cook, senior.  Hadley scares me every time she moves because she partially tore her ACL last year and did not have surgery, instead electing to work through the pain to let it heal.  She missed most of the basketball season, but she made it through softball as a CATCHER. She’s pretty tough, but it’s scary to think about her losing her senior season on the softball field.  However, she’s quick to remind us that she didn’t miss any softball games last year, so “quit worrying!” Easier said than done.

Kaitlyn Perry, senior.  KP reminds me of Tim Roupp when he played basketball.  Roupp’s coach at the time, Stu Clem, used to call him the glue of the team.  “We can’t play without him,” he’d say. KP is similar for us. Her stats are not flashy, but she’s an extremely smart kid who sees/knows the way things should be.  She will start some, but to be honest we like her off the bench because she can come in for any of the four perimeter spots.

Maggie Martine, senior.  Mags is strong kid who is a high-level roller skate speed skater.  That training has built her strength to the point that Assistant Coach BJ Basinski doesn’t like guarding her in practice.  “She puts and elbow into me and I can’t move her,” he says, and his bruises support his reluctance to step into the paint with Mags.   Maggie led us with 10 points on Tuesday in our Mt. View game. The rest of us were off that night, but Maggie was solid. We hope for more rebounds (she only had two in that game) and a consistent season; if she can do that, she will open up a lot of other things for us.

Ellie Basinski, junior.  Ellie is a two-year starter and we need her knowledge and scoring in order to be successful.   She’s started a little slow this year, but a lot of that was in her head. You see, the game at Forest Grove Tuesday was special for Ellie and her dad, BJ, because the facility—new, spotless, huge—is called “The Basinski Center.”  BJ’s dad/Ellie’s grandfather, Jeff, was a longtime coach and AD at Forest Grove, and obviously impacted that school and community. Jeff passed several years ago, so playing in a building named after him weighed heavily on both BJ and Ellie.   She will get it going soon, and we will use her outside shot to loosen us up.

Trinity Miller, sophomore.  Trin is learning on the job.  Because we don’t offer basketball in this district until a kid’s freshmen year (people in other districts do not believe this when I explained it, but that is a topic for another issue) Trin had not played much until last year and was quickly thrust into the varsity scene.

That happens often at CHS; too much, too soon…out of desperation. Trin was not “ready,” but she is a competitive little squirt who loves the game and hates to fail. That’s all a coach can ask for in a player. She will start some games for us this year, and will come off the bench at times, but she will bring her best each night.  She’s hit two 3’s in each game so far; we expect that to continue, and eventually increase. Being a point guard is not easy as everything runs through this position. I’m proud of how fast Trin has learned to embrace the position. We still ask Dom to protect her, but Trin is coming along and could be a point and off guard next year as we have something special going on with a certain little freshmen spitfire, Quynh Vu.

The rest of the team is “swinging.”  That means they play a combination of JV and Varsity.  The OSAA rules state that a player can play five quarters a night, so we swing players in order to get them playing time because “you don’t get better sitting on the bench!”

The goal is for them to be full-time varsity, of course, and sometimes getting those JV minutes are the ticket.  (Trinity started on the JV2 team last year, then became a swinger mid-year, and eventually started the last three varsity games.)

Those swingers include junior Charlie Marcum, sophomores Madisen Kramer, Ellie Greene, Naomi Daychild, Naomi Maldonado, Milana Oliphant and freshman Vu.  This is a solid group of kids that will form the nucleus of next year’s varsity team, and there are a couple of them who will help us this year, just as Trin did last year.

I really like these kids on and off the court, and think we will have a decent season.  To put East County schools in a league with a private school—Central Catholic—and a large, socio-economically privileged school—Clackamas– is a shame and the OSAA should be embarrassed for doing it.  (For the last 8 years we also had Oregon City in our league. Ridiculous.  Twice our population and a very different socio-economic situation.)

But once I get past that frustration, I think we will be in the hunt for a 3rd or 4th place finish, if we are healthy.  No guarantees, but other than CC and Clack—and in some ways Barlow—the rest of the league seems to be pretty competitively balanced.  Nothing easy, but pretty equal other than the top two or three teams.

I’ll preview those games and teams as they appear on our schedule.