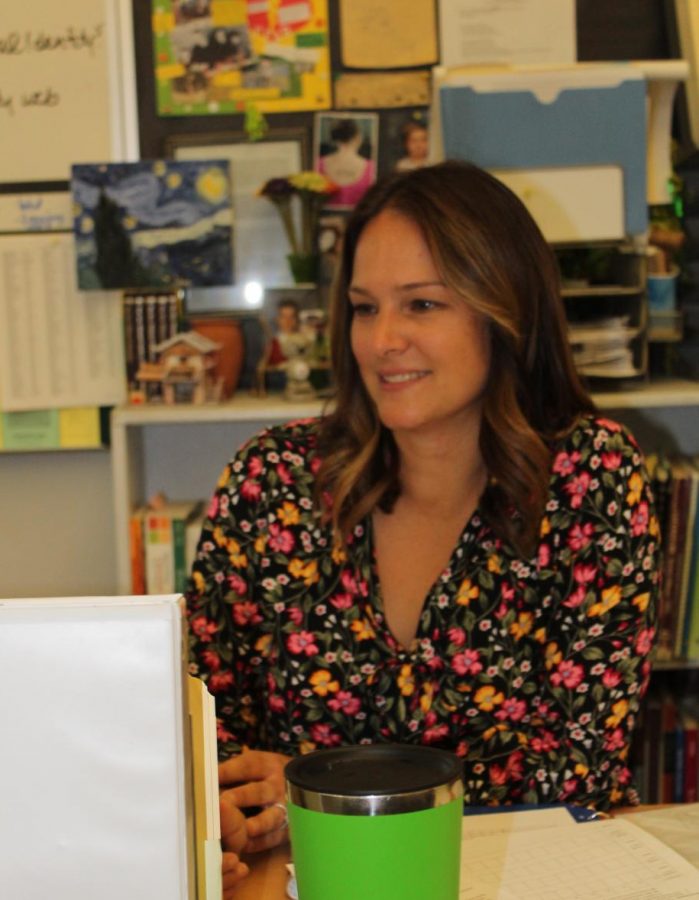 Stacy Vanderpool gets ready to teach a lesson. She is one of the teachers that are part of the freshman teams.

There’s a new thing in town changing the way schools look at their process of educating students. This new thing is called “teaming.” Many of you out there might have already heard of teams, especially if you went to CMS.

However, this teaming is a little different from the way teaming was at the middle school. Every few weeks, a group of teachers teach a group of similar students and talk about how the freshmen are doing in each of their classes and how to help them improve.

Last year, in preparation for freshman teams, Principal Mairi Scott-Aguirre, along with some other staff at CHS, went to Chicago to visit schools with teams already in place. She also set up a trial team to see how it works first hand.

The trial team consisted of the same teachers that are apart of the freshman teaming today, except for Katy Holk whose place was taken over by Kate Dean.

After all of the preparation that took place this past year, the freshman teams are now in full swing. The teachers currently involved are Kate Dean and Cory Brook-deBock for science, Kevin Christie for social studies, and Tim Roupp for math.

Every six weeks these teachers meet up to figure out if students are on track and discuss how they might be able to help students if they are struggling. According to Scott-Aguirre, the teacher meetings should help improve instructional practices.

If you’re a freshman or know someone who is, don’t fret. To help ease your minds, freshmen still have the ability to choose their classes and electives; these changes will be more noticeable for the teachers than for the students.

Also, CHS is not planning to expand the teaming throughout the entire school; it is just a program for freshmen to help make the transition into high school an easier one.

Some of the reasoning behind starting freshman teams was to help the success rate of good grades and graduating become more prominent at CHS.

“Most kids worst year is freshman year, but don’t drop out until junior year,” Scott-Aguirre said. “The goal is to get 90% of Freshman on track, which we’ve had 84% in past,” she continued. In order to achieve that goal though, freshman must pass six or more credits, which means not having the availability to fail one or more class a semester.

Although there are a lot of good things about the freshman teams, there are bound to be bumps in the road, just like anything new. One of the biggest challenges, so far, is deciding how the teaming will work with the math department.

What’s tricky is several students are in a higher level of math, but those math teachers are not apart of teams which causes the freshman to be excluded from the teaming program. This is what CHS calls singletons: freshmen who are not part of a team.

Plans for freshmen teaming in the future has already started to take shape after Scott-Aguirre took notice of North Medford High School. She said North Medford High School’s teams are a huge success, with innovative ideas, such as, including security people in the program. This inspired CHS to consider adding counselors and special education services to the teams.

The freshmen teams are well on their way to becoming a vital part of CHS. “ It’s a huge change, but it’s had quite the positive start so far,” Scott-Aguirre said. CHS believes that the freshman teams will further help the transition to high school, better grades of students, increase the graduation rate, and better overall success.