Self Guides Eagles To 2-1 Start 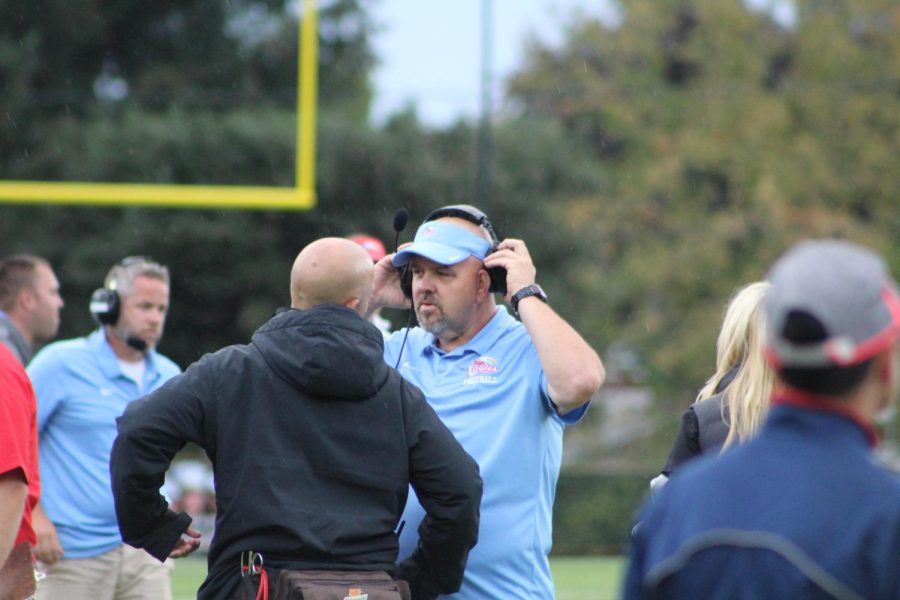 The Eagles are starting off the season with an overall record of 2-1. Their first non-league game was a 28-7 loss at South Medford. “We made a lot of mistakes.  It was our first game,¨ said first-year Head Coach Butch Self. The second game was a close win, 20-16, against Roosevelt. “We cleaned up, made multiple positive steps forward,” said Self.

Last Friday, the Eagles got another win, defeating 54-8 against Madison.

Self expects this year’s team to make a statement at the Mt.Hood Conference and make the best out of the Centennial football program.

“I have big goals and dreams for this program,” Self said. “I’m really looking for long term.”

With the help from Senior captain Nick Garcia and defensive linebacker Ihe Gonzales, Self has been able to keep a very positive atmosphere surrounding the team.

Garcia and Gonzales have been outstanding leaders, according to coach Self.

“Nick is a great leader, not just on the field but as a captain. Ihe, he’s just a great guy. He works hard and encourages everyone. He always lightens up the mood,” Self said.

Self said “This isn’t just about football, but the Centennial community all together.”

“I expect to win every game, we practice and play hard. Our goal every game is to eliminate  the mistakes and become a more efficient football team.”

After legendary coach Chris Knudsen resigned as the head football coach last spring, Self saw a big opportunity open up.

This is Self’s 23rd year coaching football with the last four years coming at Glencoe in Hillsboro, where he was also the Activities Director. He also spent seven years in West Linn where he taught Social Studies and English.  “I had some stops at Sandy and Estacada, but nothing for too long,” he said.

Self is good friends with Knudsen and assistant coach BJ Basinski.

¨I tried to apply (at CHS) multiple times, it’s a great place to come and be.¨ Then I heard that the football coach position opened up and I kinda just ran with it,” he said.

“Coaches have always been impressed how tough and hard Centennial players always were. Just white collar and tough. It was attractive.”