David Reminisces About His Career 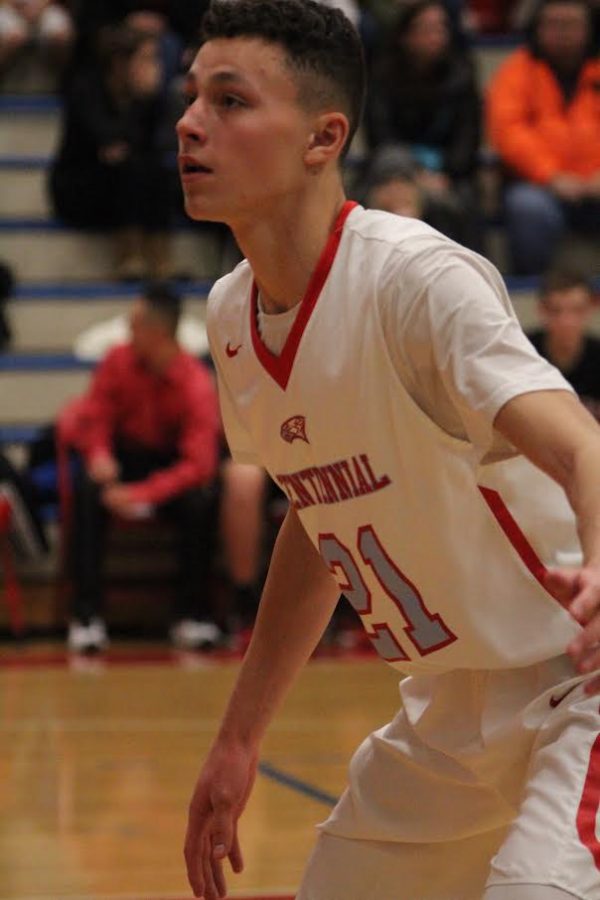 My four years here at Centennial really have been interesting and fun. One thing about Centennial that many take for granted are the weather problems but there are a lot of great places to exhibit since the the scenery is phenomenal.

Every season brings its own climate with it and it’s nice to have a change after a couple months. Winter will now always remind me of high school basketball and the straight grind that it was. Fall will always remind me of that “going back to school weather.” I’ve grown mentally and physically quite a bit over the last few years. I went from being a little freshman to having the opportunity to lead the varsity basketball team my senior year. It’s pretty crazy how much I’ve evolved since my freshman year.

Speaking of which, my freshman year didn’t go as I thought it would. I wasn’t really known for basketball since the only organized season I played was CBA unlike the other guys who played Varsity Prep. I thought I was slept on by other players who didn’t take me seriously but I ended up making the freshmen 12-man roster.

My goal was to just make it, which I did, and later prove myself worth of playing time, which I didn’t. I was mainly just a spot-up shooter and as the season went on, I buried myself deeper and deeper on the bench. The team record wasn’t good either. I was very inconsistent and didn’t provide much other than shooting. I also wasn’t really on good terms with head coach Andy Baldwin as I also didn’t think I was getting enough chances or opportunities. I believed and still believe freshman and JV players should be getting a little more developed through playing time especially since I was fairly tall for my class and looked somewhat promising. I was very frustrated and decided to skip some practices which ended up being a very freshmen-like mistake and the nail in my coffin for my first year.

Coach Baldwin was supposed to step up as JV coach as well the next year, but he left, which marked my first coaching change. Instead, former Centennial basketball standout Tyler Pannell stepped up to the plate as a last second resort. For me, it ended up being a blessing for the JV program. I turned my frustration from freshman year into motivation and worked very hard over the summer. Coach Pannell made it clear that he saw potential in me after a rough and heated practice screaming angrily at me in front of everyone, “DAVID YOU HAVE THE MOST POTENTIAL HERE!” Of course he didn’t say it as nicely but the point was clear.

I ended up being one of the best players on the JV roster along with Sonam Phuntsok, Chris Cernatescu and TJ Tyler. My exposure to playing time opened a path to player higher level basketball. I caught the eye of the varsity head coach, Osa Esene at the time. We had notable wins against David Douglas and Oregon City finished with a .500 record.

My junior and first year on varsity was a straight grind. The level of play was way higher than any levels I had played before. However, I had a good junior year being the sixth man and providing good defenses and rebounds. I fit in quite well and I got to display the athleticism and mental toughness that I never knew I had. This season was full of hard practices that were very intense. I had to guard players like Jeret Schmelling, Rhys Atkinson and Brendan Ritchard daily. I think I did a good job and they pushed me everyday to be better and better. We always competed. It felt very satisfying being the only junior and non senior getting playing time, the feeling that I could hang and sometimes even excel with those guys drove my confidence.

Our tournament in San Diego will be a memory I will keep forever. I especially bonded more with my own classmates and also Eli Porterfield who went along. We won the whole tournament after defeated a tough and well-known Crenshaw High School. I remember they walked in the gym late for warmups thinking it was going to be a cakewalk to the ‘ship. It was basically a whole black team vs a whole white team. They thought we were just a bunch of unathletic boys but am I glad we gave them the gas. Their faces at the end of the game were priceless, filled with disbelief and frustration. Overall, the season made me realize my body can go much further than my mind and I’m glad for coach Osa for pushing me to be the best I can be.

Moving on to my senior year, I was very glad John Poetsch took the head coach spot after Osa left after getting the opportunity to coach at a higher level. I’ve heard many good things about Coach Poetsch and I remember Pannell saying, “He’s one of the best coaches in Oregon.”

Poetsch turned out to be my type of coach by providing a no BS attitude and he wasn’t scared to put his players back in line. The season was by far the most frustrating season and time of my life ever because I had put in so much work during the off-season but it just didn’t turn out the way it was supposed to. Injuries lingered me and I was also pretty out of shape. I think Poetsch played it a little conservative when it came to conditioning because of the position he was in, being back to coaching and sort of trying to not trigger any certain feelings from certain players. I still believe coach Poetsch is a great coach who will get Centennial out of the slump and back on the radar. He’s put in so much work for this program and you can tell the man really cares for this community. I also believe coach Poetsch is working with everything he’s got and he’s creating a culture and a winning mentality. It won’t be long.

To conclude, my time here at Centennial really shaped who I am as a person and I’m glad that I got to meet the people I met. The seniors and I still have a group chat where we plan to keep in touch since many of us are parting ways and going out into the world. I plan to attend Oregon Institute of technology in Klamath Falls to pursue a degree in Medical Imaging and Radiology. It’s really crazy how drastically my life is changing and I’m making grown up decisions now, living on my own. I am thankful for Centennial.