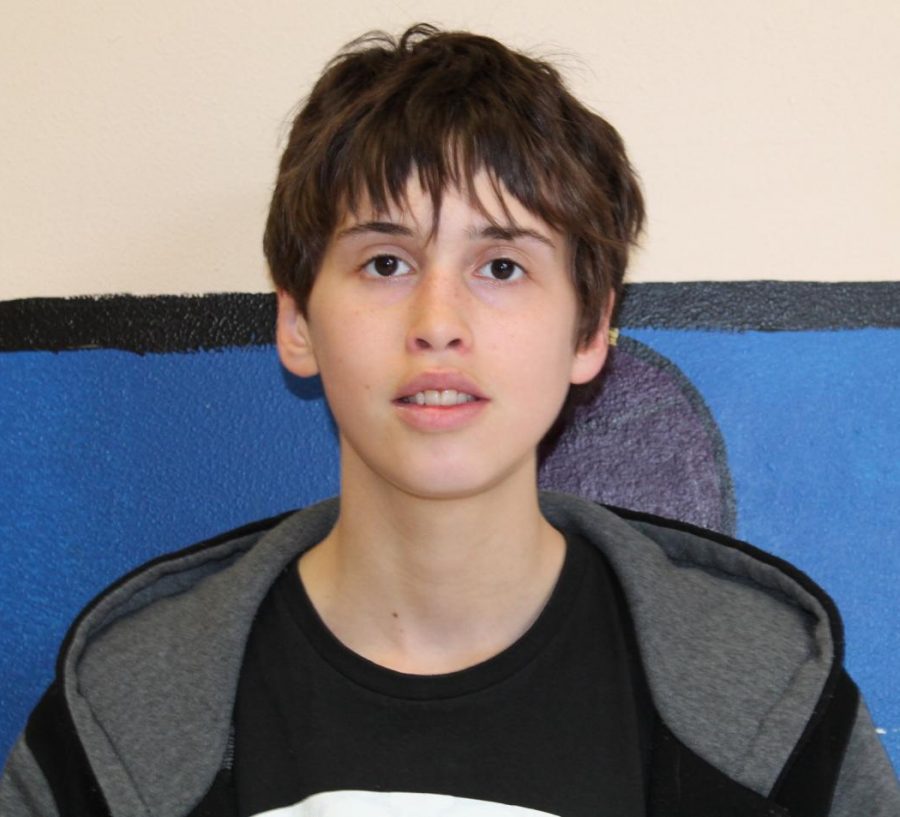 Jax Flug stands by the art wall. Flug expressed his views on SADD.

SADD/EFM is a school wide event in which the whole school takes part in dressing up as a ‘dead’ person and wandering the halls not speaking, not smiling, simply stonewalling to make it look as close to a dead person as possible.  These students as ‘dead’ people are not to contact anyone throughout the whole day. A paragraph or larger is written about this ‘dead’ student, about the destructive decision that led to their death and put on display along with all the others partaking.  Students not partaking are to leave these dead students alone, not to try and make them smile, laugh, or speak but to simply pretend they are not there.

This school event can be important as a shock factor to other students.  The shock factor may or may not scare students into being more careful with the decisions that they make.  But from what I have seen this doesn’t work which is why we are still having these devastating student deaths every year.  Maybe it’s because students just don’t care about their well being and would rather have a good time risking their life. I think that SADD/EFM is not working as well as it could.

I say it’s not working because students are still getting into car crashes, and dying due to stupid decisions.  I really can’t think of any other way to convince students to be more careful in times like these so SADD/EFM is the best thing anyone can really think of without actually hurting lots of students.  Teenagers at this age often believe that nothing horrible will happen to them because they are young and that being young somehow makes them invincible. The SADD/AFM focuses around drunk driving or just driving in general but students also die from drug overdoses or trouble with rival gangs.  I think we should start including these threats to students’ lives in the SADD/SFM events because students often die from these things as well.

SADD/EFM was changed up this year because of recent tragic student deaths. Teachers and others did not want to worsen the already fresh wound from the student deaths.  Instead of wandering the halls dressed up in a dark robe and creepy white and black face paint, participating students walked about the school wearing a shirt that read “Wreckless” across the front chest of the shirt and a black star shaped balloon tied around the wrist. CHS did this on behalf of the students that may still be affected by the recent student deaths, but they held the most realistic fake car crash I had seen yet even complete with the actual sound of people getting into a car crash and someone calling 911.  The fake car crash set up was probably the most affecting thing I had seen that day. People slumped out of the windows, fake blood dripping from the windows where the bodies lay, the crumpled fronts of the cars from impact, and even oil leaking from the smaller car with two girls inside.

CHS toned down on wandering the halls but they really ramped up the fake car crash scene from last year.  I found the fake car crash the most effective simply because it just looked so real to me. I was a little bit scared for some of the people affected by the student deaths weeks before this event, as they had attended and not known how real this would look and what would be running through their heads.

Overall, SADD/EFM has become less effective.  While I can’t really think of any ways to improve on this event, I do also think it could provide a good shock factor even if it doesn’t make students stop what they are doing out of fear, but maybe make them think at least twice before they do it.