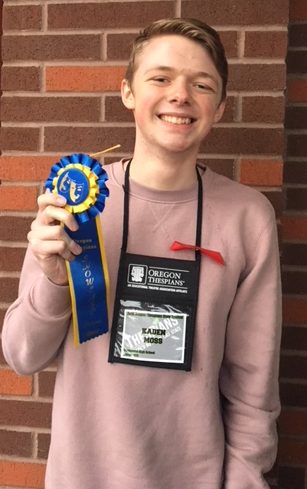 Kaden Moss wins award at state in Solo Acting. Many other members of the drama department were also recognized at the state Thespian conference.

With spring starting, Centennial’s clubs will be performing and partaking in upcoming events.  Here is what is going on for each club:

The drama department attended state on the 5th-7th.  Kaden Moss placed for his solo acting event. Ami Akiyama’s one act she directed received a superior rating.  Aliya Falls and Kaden Moss were selected for an all state show they auditioned for. There were almost 1,300 Thespians at the Oregon State competition.

Concert Choir competed at Districts on March 20 at Reynolds High School.  They competed against seven different choirs, with Oregon City coming on top.  Centennial was able to qualify at State. Submission videos are selected at random to see who gets picked.  Choir director Bryce Cloud doesn’t think they would get picked because of the large amount of other schools that have entered.  The Choir department will have a fundraising telethon this Wednesday as well.

The speech competitive season is now over.