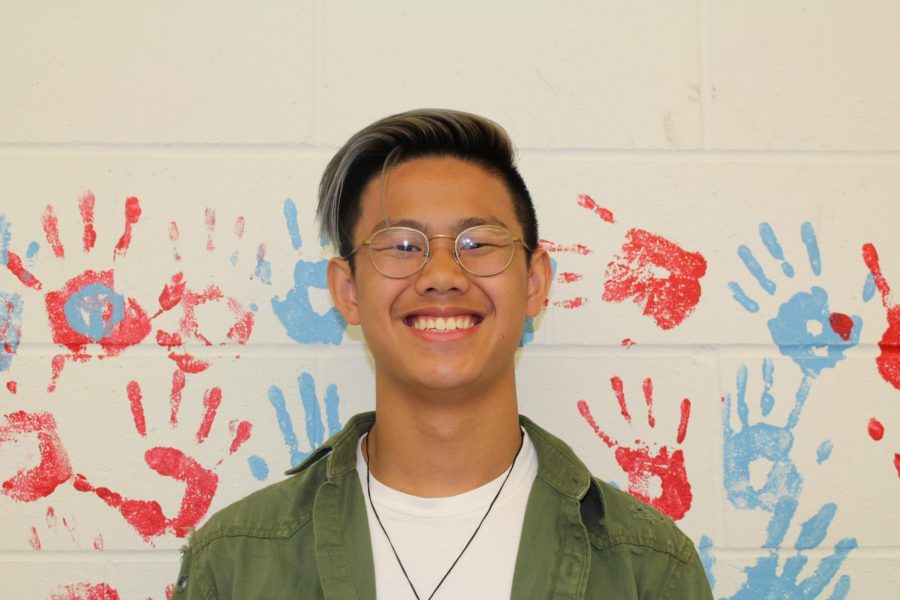 Austin Peng hangs out by the hand wall. Peng discussed his views on the walkout that occurred.

In recent years we’ve seen a sharp rise in school shootings. However the multitude of deaths have yet to deter our NRA backed congress. We witness countless crimes against humanity and we constantly rise to support gun control but to no avail. As teenagers we understand the fear that any day now, any period, hour, or minute a shooter could potentially take our lives as well as our fellow peers and staff. Despite the slight disruption in class, with this walkout we can honor those who have been unjustly murdered and allow our voices to be heard.

Many thought it would’ve been over with Columbine but really it was just the beginning. According to Time magazine, “since 2013 we counted 6 adults and 35 children killed in these types of school shootings, as well as 12 adults and 92 children injured.” In an environment where some consider a sanctity, should the numbers be that high? These children who have been following a routine, seven hours a day, five days a week for years, hoping that eventually the time spent sitting in class and cramming knowledge would pay off in the form of a happy, successful life, never got that chance. As teenagers, we don’t have any children of our own, but we can sympathize with those parents knowing that our own would be crushed if we were to ever prematurely exit this world. In the name of those who have perished, we as fellow students will stand up and assure that change occurs.

As teenagers, we often get looked down upon as insignificant and unimpactful by our predecessors. The experience that they have had seems to trump ours and thus we are deemed in a way that discredits our own knowledge and experience. We however, were born into a time where the environment has been ruined, violence is at a peak, racism is being rejuvenated, and overall lugging tons of baggage that we did not sign up for. We are the future, so why is it that when it’s our turn to voice our opinions, they get shot down so quickly? Furthermore, we were born into the technological age, rather than having to adapt to it. We wield the tools of the future, and whether that may or not be a positive trait, it’s true. The ability to access information is unfathomable due to the abundance of sources. This way we are able to develop our own opinion on topics rather than being spoon fed and brainwashed. Our right to push for change is just as important as our so called “adults.”

With this walkout, there are tons that believe that this will take away from our education and disrupt the learning environment. Well, if there was a school shooting that occurred, would that not also be a disruption of learning? More so than 17 minutes of honor and respect to the fallen?

Also, how much learning is done in 17 minutes? Not enough that it is so detrimental we could never catch up. If walking out harms our education and deserves the disapproval of others, what about the students who skip whole days, or sleep in class, or spend it all playing on their phones? Or cleanings at the dentist? It takes longer than 17 minutes, so how come we don’t have radical opposition to dental cleanings? Yes it’s absurd, but that’s what some of these arguments sound like.

Gun violence is such a harmful aspect of the world. These tools that were meant to protect us, are the ones that end up killing us. We’ve had enough at this point, and things need to change. Even if legislation doesn’t occur just yet, our voices will be heard. We will be on the news, and we will leave an impact. To those students taken too early, this one’s for you. To those adults who oppose us, or perceive us from a pedestal, this one’s also for you. Enough is enough.