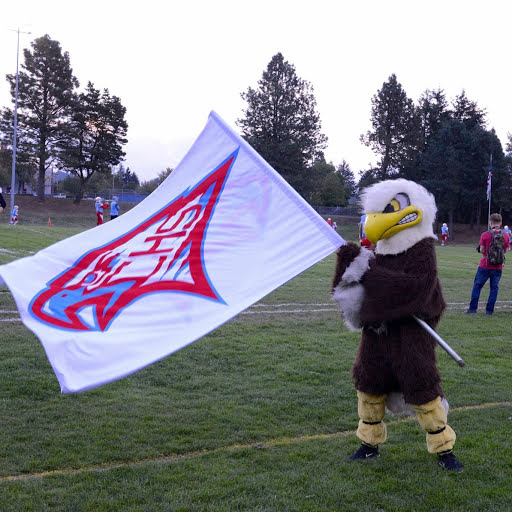 This Elmer Eagle costume has been replaced and there is a bit of turmoil in how this all came about.

As most students have noticed, Elmer the Eagle has gotten a makeover.  The costume has been redone and a new student is in the costume, but who’s behind all of this?

One would guess that the activities director, Jimmy Mei, would have the most information about choosing the eagle and all the hubbub surrounding it.   He happened to not know much.

He did say,”There’s a place for both costumes.”

Everyone’s next guess would be Ehren Schneider, former activities director, would know about selecting the eagle. He mentioned that a student came to him wanting to remake the costume and he said, “Sure,” sometime last year.  He doesn’t know how the eagle became the eagle after that.

He also said that most years, nobody wants to be the mascot so they have to force students from student council to do it.

The last resort is going to the eagle himself.  He, who would like to remain anonymous, said he went to cheer tryouts and was the only one trying out for the mascot so he immediately got the spot.

He plans on doing it until he graduates, but did say, “It’s tricky especially with the haters.”

Designer Christopher Leal said he loves to recreate and improve things. He said that the old costume was old and smelled bad.  He made many different versions and is still working on perfecting it.

The previous Elmer, Emilee Pease, wants to make it clear that she was the first official eagle and this is her side of the issue. “It all started in 8th grade when my friends wanted to try out for cheer.  It was brought to my attention that there was never an official mascot so I said, ‘I’ll try out’.

“That’s what I did and I crushed it. During Football I was the mascot. I was Elmer, and I loved it.

I was ready for my next year as Elmer.  Then I was replaced and so was the costume. I wasn’t even aware of the second tryout, I was just looking forward to my second year as Elmer.

“Over the summer I contacted my contact [Schneider] and never heard back. I’m just a little salty about the situation. Maybe one day we can work something out between the two of us.”

It seems the whole mascot switcheroo was just a miscommunication that will hopefully be resolved by next year.