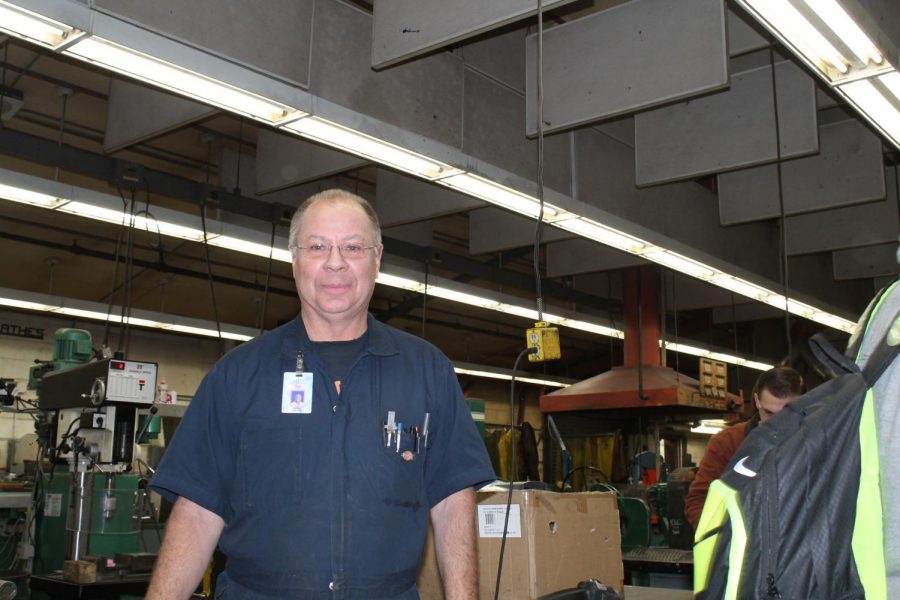 Metals teacher Mark Watts says goodbye to his second period class. Watts has been at Centennial since 1979.

Metals teacher Mark Watts has been at Centennial since 1979.

While he won’t commit, yet, he says this could possibly be his last year teaching.  Or maybe next year.  He’s just not sure, yet.  He actually “retired” several years ago but agreed to come back half-time in order to save the metals program.  Half-time became full-time when the laws changed and allowed him to both work full time and collect his retirement pay.

So what’s another year? There’s not much difference between 38 and 39.

Watts has noticed many changes throughout his tenure at Centennial High School. When he first started teaching, “There were a lot of farm boys. Now there are more inner city kids.”  He also noted that chewing and spitting tobacco was a big thing among students back in the day.  Now that is not as much of an issue.

One big change Watts mentioned was kids ability to use tools.  He said, “Kids are not as good at using tools nowadays.  Some kids don’t even know what a screwdriver or plier is.”

Despite the changes Watts has seen one thing has remained constant through his time at Centennial: The kids.

Watts said “Centennial kids are good.  I consider them my labradors.  You yell at them but they come right back to lick you.”   Watts’ devotion towards metals and kids is a big reason kids enjoy taking his class.

He said, “It’s a passion of mine to get kids a career in this field.”  As a teacher, Watts’ biggest pet peeve is kids coming to class tardy.  He said,  “In this profession 15 minutes early is on time, and on time is late.”

Punctuality is something Watts has tried to instill in his students throughout the years.

Watts made to sure mention that the most memorable thing for him at Centennial was the electric car team which existed for 20 years.

Whether or not Watts retires this year, his biggest concern is finding someone to continue on the metals shop.

Even after 38 years, he’s still passionate.