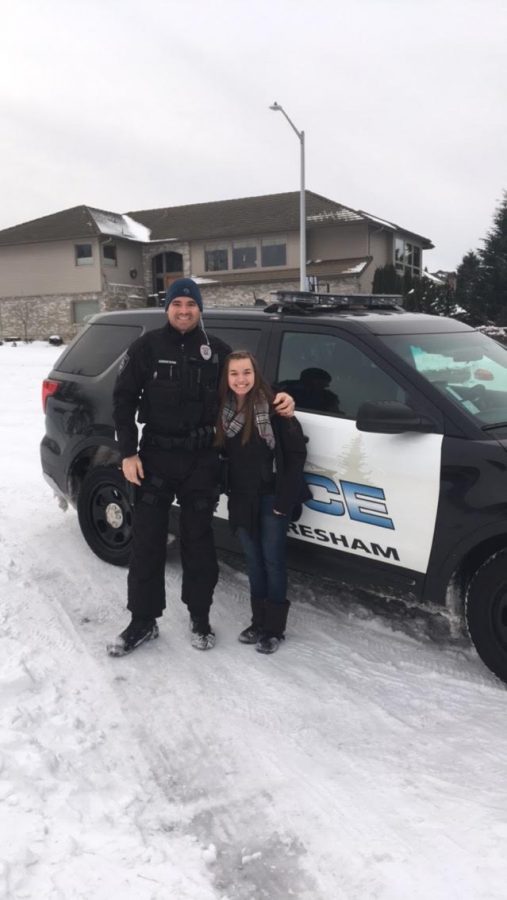 Michael Erickson drops Kaylee Vawter off at home after taking her on a ride along.

The name Michael Erickson is well-known around Centennial. He is the school’s’ resource officer. Erickson lives a double-life, while he works at CHS, he is also a police officer outside of school as he is a Gresham Police Officer. To show me what he does outside of school he allowed me to come on a ride along.

On a non-school work day, a typical day for Erickson starts at about 5am. Once he is ready, he makes his way to the police station to get his gear and pick up his police car.

During one of many snow days, Erickson took an 8-4 patrol shift. This was ride-along day. He picked me up at around noon and we headed out to fight crime. Due to the snowy weather, it was a very slow day. Our first call was from a girl had received death threats and wanted to speak with an officer. While making our way over to the call, Erickson explained to me the things that are on the computer in the car. We chatted with her and she told us what lady was sending her death threats. When we went to speak to her, we found that she had moved. We put a call into both ladies, but ended with nothing.

We then drove around waiting for new calls. After about an hour of not having any, we checked into a police pit-stop where Erickson explained to me that this is where they fill out paperwork and catalog all evidence. We then drove around some more and we pulled someone over for running a red light. Erickson said a few codes into the radio and then explained what he was saying to dispatch. Soon after, we received a car about a man that got his car stuck in the snow. We gave the nice man a ride home.

Towards the end of the shift we finally got some action. A lady had attempted to overdose. Erickson told me that police get called into medical calls because they want to make sure first-responders will be safe from harm. When we arrived Erickson asked that I stand off to the side for safety reasons. When I stepped off the step I slipped on the step and slip into the snow. Erickson was holding in the laughter and quickly turned on his professionalism. It turned out that the pills she took would not do too much damage and a trip to the hospital would do her well.
It was that snowy day that I learned that school resource officers wear many hats.