Ellett Kicks Her Way Through 5 Decades

Dance Team Coach Anne Ellett started at Centennial in 1966 and has no plans to leave anytime soon. 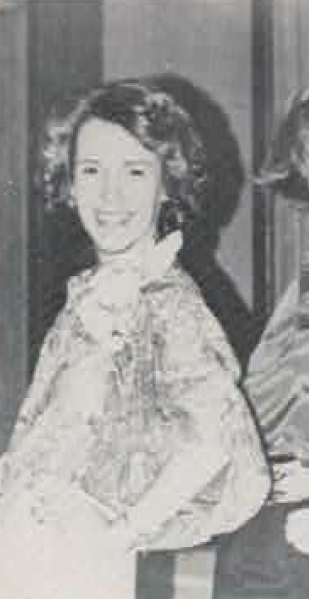 Anne Ellett from the 1979 yearbook.

Growing up in a neighborhood full of boys, Anne Ellett’s mother thought cheer and dance would be the best for her.

And it appears that mother does know best. “I started dancing at 5 and cheer in 7th grade. The neighborhood was all boys, so my mom chose dance,” said Ellett.

But even her mom couldn’t have imagined the impact the nudge she gave her little girl many years ago would become what it has, as this year marks Ellett’s 50th year as Centennial’s dance team coach.

She started off with her own dance studio while going to PSU (Portland State University).  Thinking she had her plan set, she got asked to become the dance team coach from some girls who went to dance at her studio. “I really don’t think I knew what I was in for at first, but I enjoyed working with the teams over the years as they have always been challenging and so rewarding.  Watching these girls develop their personalities, values, confidence and academic skills, is worth the hours of practice and performances.” Ellett had many advisers throughout her career to help out with the team. Betty Coopmen, who was a part of the staff (PE teacher), helped her tremendously.  “She made my job easier because I wasn’t on staff,” said Ellett.

“There weren’t a lot of ‘dancer’ dancers. I had a few and I had to do some convincing to get kids to come out.” In 1966, Ellett started off with about a dozen girls, who were mostly juniors and seniors. They  were later known as the ‘HiC’s.’ “We didn’t want to be the Centennial dance team or the Eagle dance team, so they came up with HiC’s,” said Ellett.

During her junior year of college, Ellett realized she couldn’t run both her studio and be the high school coach, so she closed down her dance studio.

This wasn’t without a little drama as her father had a plan for Ellett, and that was for her to have her own dance studio. “I think he was a little disappointed that I gave up my studio, but was really proud that I graduated from PSU.”

After her first year of coaching, she prepared for new girls to come out for tryouts, and the momentum she created continued throughout five decades.

In 1973, former dance members and Ellett reunited.  Along with camaraderie, several of the members decided it was time to expand dance throughout the state. “There weren’t really competitions during those days, so the five of us got together and decided that we would put together a state competition.” Canby, Clackamas, Grant, Rex Putnam and Centennial hosted the first state competition which was named the Metropolitan Dance Festival.  The event is now hosted at Centennial every year.

Each year she teaches her new dancers a concept that they’ll remember for years; FAD:  ‘F’ for Fun; ‘A’ for Academics, and ‘D’ for Dance. Ellett tries to connect with all the girls on the team and is still in contact with many former dancers. “I think they need family and fun, just family and fun,” she said.

During practice, Ellett says that her favorite times include seeing the girls work hard and showing commitment. “My favorite part is at the end and seeing what they’ve learned and telling them what a great job they’ve done that practice. I’m always excited to see our team and thankful they show up, especially for morning practices.”

Fifty years surely creates a lot of memories, but Ellett says she cannot choose a favorite one or a favorite team.   “Every year is special and my favorite year,” she said.  Ellett says she had continued to coach for 50 years due to the creativity and effort each dancer brings to the table every season.  “Each and every show is a favorite. From the Flower Drum Song, Minstrel, Bullfight Spectacular, Zanadu, New York, Space Odyssey, Success, Batman, Red, Breathe, and many many more,” she said.

Ellett has also found that the staff at Centennial has added great support and has contributed to the success of the Hi C’s. “All the people at Centennial were a family. It was such a family. We were always connected and everyone supported each other’s groups,” she said.

After 50 years, Ellett still doesn’t find herself thinking about leaving the dance team. “Did I think I’d still be the Hi C Dance Team Coach today? Not really. But it’s been so much fun and I wouldn’t have changed anything. I think the longevity of my coaching years has been due to many factors. I’ve been blessed with wonderful assistant coaches.  Jane Rove Whitehead, Mary Ann Anderson, Rhonda Wilson, Michele Blucher, Lynne McEachern and many advisers including Debi Dube.  It’s been a great dance team epic and I’m not done yet.”