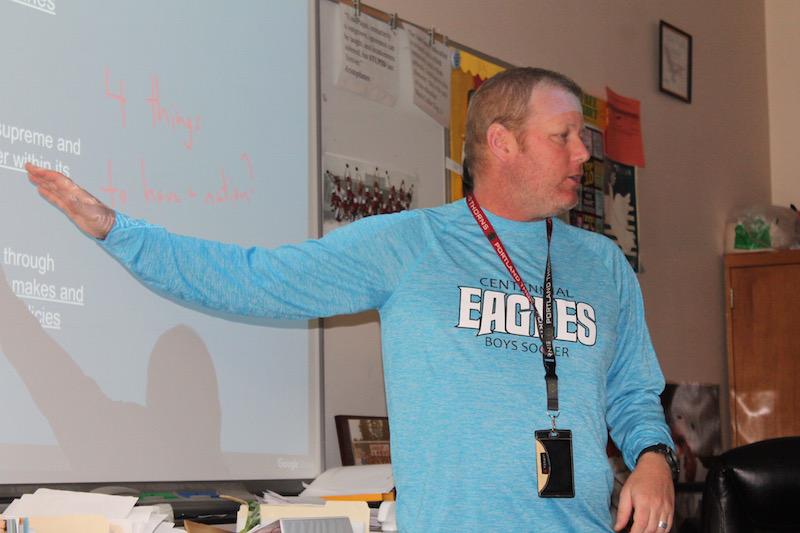 After being diagnosed with stomach cancer last year, Justin Rosenblad has continued to go through chemotherapy, teaching and has gotten back to coaching the boys soccer team.

“He has been super positive, it hasn’t stopped him from doing anything,” said his oldest daughter, Hailey, a freshman at Centennial.  He is a full time social studies teacher, father, and soccer coach.

“Right now is a slow process, really long and slow,” said Rosenblad who is currently going through long term chemo every other week. He says he has extra fatigue, sensitivity to the cold, and a tingling feeling on hands and feet.

The goal is to shrink and thin the lining of the tumor, then get his stomach removed and use a small intestine to build a smaller stomach. He is also looking for clinical trials, but he does not qualify yet. “It looks like my current treatment is working,” said Rosenblad.

The staff has been a great support for Rosenblad and his family. They hosted a “work party” to help clean around their home and yard. “We have always been close, but it has definitely brought us closer as a group, a reminder of how close we are,” said Rob Havrilla.

“He has a ‘never give up attitude and ‘stick with it’ mindset,” said teacher Jeremiah Hansen.

Steve Baker, who is coaching soccer with Rosenblad this season, says, “He brings the higher level, and just a lot of motivation to the team.”

He played soccer for Centennial in ’93, so growing up in the community and coming back to teach and coach at his alma mater has made the impact of this issue even stronger.

“Rosey is a super positive man and every goal he has set, he has accomplished. He has always cared a lot for each one of his students. I hope and pray that his chemotherapy brings him back to a healthy state,” said senior James Schultz who was in one of Rosenblad’s classes last year.

“He is a great coach. I hope and pray that the chemo keeps working, so he can coach and teach next year,” said sophomore Alexandra McKee.

“I always felt like he was a teacher and a coach who wanted you to succeed and would push you to be better,” said sophomore Jaqiah Campbell, a former student and player for Rosenblad.