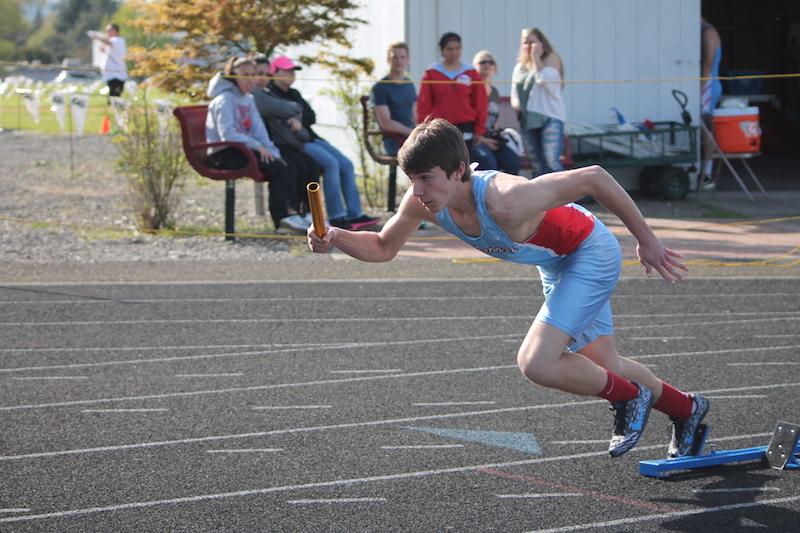 Jared Bierbauer explodes out of the starting blocks as the first leg in the 4x100 meter relay.

Eagle’s track got a kickstart with a solid win over Reynolds last week. This meet was one for the books with 118 personal records.

Both the girls and boys won with the same final score of 83-62. Head Girls Coach Luke Franzke commented, “We weren’t projected to do well in league this year. We are going to be a surprise for everyone.”

With a sound victory in this first league meet, it establishes a stepping stone for the rest of the season. Franzke said, “We have a great senior leadership group and solid underclassmen.” Adding on to that senior Anouson Keobounnam commented, “ As a senior, I must set an example to the rest of the team.”

Great performances versus Reynolds included Alivia Jackson. She injured her ankle during Javelin, but still managed to throw 105.6ft which ranked her 6th in school record history . Also the boys varsity relay team ran under 45 seconds for the first time in 5 years. Senior Garrett Mobley was the high point scorer participating in 3 throwing events.

Sophomore David Sanchez is tied for first in the MHCC (Mt. Hood Community Conference) for pole vault. This last meet he had a great showing and PR’d in pole vault with 13 feet 6 inches. Sanchez noted, “My goal is to get 14 feet 6 inches in pole vault by the end of the season.” Junior Julia Colling notched a solid 10 feet in pole vault as well as placing 2nd in the 100m and 3rd in 200m. She explained how, “you shouldn’t focus on the height [in pole vault,] you should focus on the technique.” Julia’s goal is to place at the invitational meet and at state. Additionally, Junior Noorullah Tajik runs the 100m dash and got a time of 11.90 seconds at meet against Reynolds. Tajik has high expectations for him himself. He noted, “I want to make it to state this year.

Centennial’s next meet is tonight, in North Salem. It’s the Vikings Relay: Twilight Invitational so only the top two competitors for each event will get to attend per school. Twelve schools will be there in total. There is another meet, it will be Wednesday April 20 at Clackamas High School.