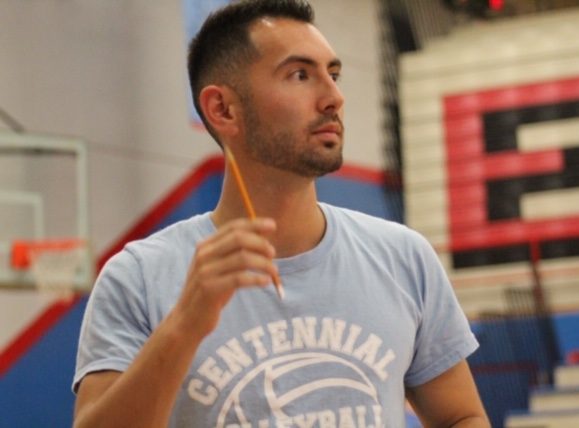 During this pandemic there have been some financial hits to the district including the cut of teacher and volleyball coach Jared Johnson. Johnson taught P.E. and health for one year at Centennial before his position was cut.

Johnson is now teaching at a Gresham-Barlow elementary school, but will continue to coach at Centennial.

Johnson said, “I plan on continuing to coach volleyball at CHS. Not being in the building is tough, but I think the team will be fine without (Michael) Wholers or myself there. Coaching and communicating with anybody at this moment is difficult. As the season approaches, I hope to get in a better consistent routine communicating with the athletes. A lot of individuals are being accountable and active on their own, which is great! Once volleyball workouts are allowed, that will also help.”

Wohlers and PE, Social Studies teacher Kevin Christie were also “lost” from the high school, in part due to Rod Lundgren (https://chstalon.com/10437/news/lundgren-moves-to-classroom-as-pandemic-forces-pool-closure/) moving from pool duties to the classroom, and in part due to Centennial Park School closing, which moved several teachers to other district schools. (https://chstalon.com/10416/feature/chs-welcomes-new-staff/)

“Centennial attracted me for many reasons. I have heard nothing but positive things about their staff. I am familiar with the school, being a Gresham native and it has always been a dream to teach and coach in one school. I hope that happens again,” he said.

He said he has, “several memories from CHS that come to mind. One special memory is watching the volleyball team get their first league victory in six years against Gresham.  Another is the students and staff; I enjoyed teaching high school students with a terrific PE/Health staff. An additional memory that comes to mind is eating pumpkin pie at the assembly alongside John [Poetsch].”