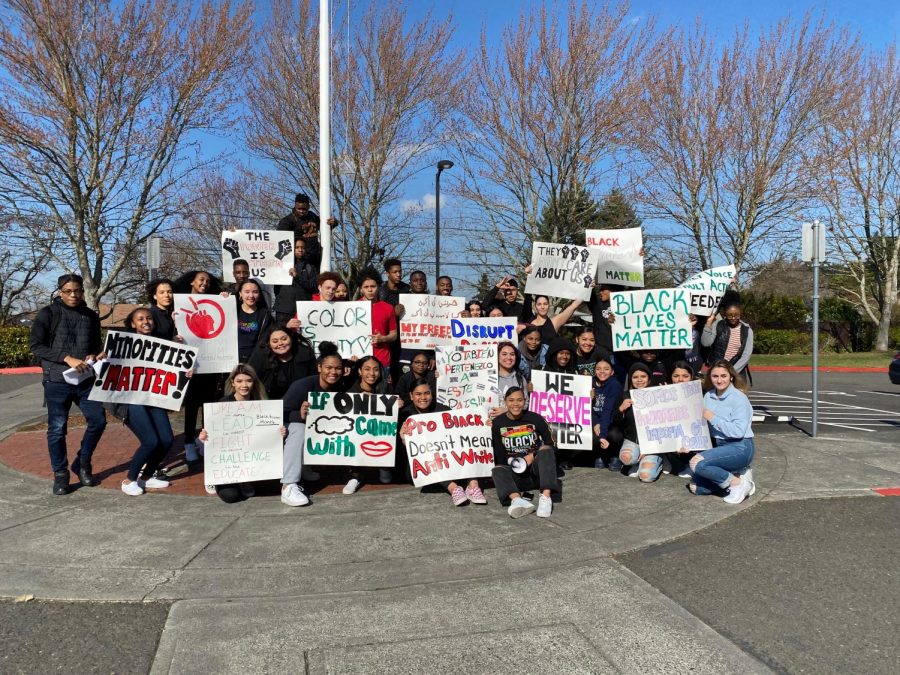 Centennial students organized a short walkout last Friday afternoon in honor of Black History Month.  By all accounts the walkout was peaceful, and students returned to class after the event.

Here is the document the students provided to school administrators after the walkout and Principal Mairi Scott-Aguirre’s response that will be read to each third period class today:

In reaction to the recent instances of racial discrimination, cultural direspect, and attacks on minority groups, the students of Centennial High School demand that Centennial School District and the CHS administration take action to change the culture at our school.

Centennial School District promises us “equal…treatment regardless of race, color, religion, sex, sexual orientation, [or] national origin” in addition to the assurance, “that there will be no discrimination or harassment of individuals or groups in any educational programs”.  The Oregon Department of Education makes the same promises and are the ones requiring that CSD follows this statement of non-discrimination.

However, as a student body, we continue to see this statement being disregarded, ignored, and outright disobeyed.  The school has shown noncompliance to this promise they have made to us with little effort being shown to make up for their mistakes.

We demand the following in order to ensure a safe space on campus and that minority students no longer feel ignored or disrespected.  In addition, we want the culture on campus to change and to have it be made clear that Centennial High School as well as the district does not stand for the environment that has made itself present on campus in recent months.

We want not to be profiled by our teachers, security, or other adults on our campus because of our race, dress, gender, etc.
We want to see our teachers go through trainings on how to handle student diversity by people who represent the demographics at our school; we demand that this happens sooner rather than later.  From this we would like to see our teachers put these skills into practice and show us that they know how to address us.
We need there to be open discussions about race and to have it be known and be true that our teachers and staff do not find the topic of minority groups to be an uncomfortable one.
We need to see that when racist remarks and discrimination occur, the school demonstrate a no tolerance policy in which they immediately and assertively adress the situation as well as the individual who is responsible for it.
We want to see the following consequences for the individuals who perpetrate harrassment and discrimination towards minority groups to make clear that Centennial does not stand for this behavior

Last Friday, there was a walkout.  Some of our students organized themselves and asked the administration and staff to serve them better.

We recently had an assembly for Black History Month.  We learned about some of the history that we often don’t cover in schools.   We need to continue to learn about all of our races and cultures as a whole school and in our classrooms. This will take time.  We need to do this because our District promises “equal treatment regardless of race, color, religion, sex, sexual orientation or national origin.” In order to treat each other equally we have to acknowledge, know, and understand each other.  The district also promises “there will be no discrimination or harassment of individuals or groups in any educational programs.” We take this seriously.

As we’ve begun this journey one of the things that happens is people push back.  Celebrating Black History month represents a change in the way things are done and a change in who is acknowledged.  We intend this to be an additive process, more people get seen and acknowledged. It is not a zero sum game. We will not exclude or shut out white people, males or straight people. We will find ways to acknowledge and celebrate our Latinx, Black, Asian, Russian, Middle Eastern, Native American, and LGBQT students and staff. We will celebrate all gender identities, physical abilities and differently abled .

As we change the ways that we act and flourish at school we will inevitably have conflicts and problems. There are positive ways to work through conflict and disagreements. We will not allow students or staff to assert power by harassing or intimidating others. We have an absolute no-tolerance policy for the use of racial, ethnic, and homophobic slurs. This includes the n-word. It is important that our students report instances of any type of harassment or bullying to an adult. Then that adult needs to report the incident to administration.

We appreciate that our students have spoken up. We have listened and we are confident this is the beginning of some important changes at Centennial High School. Our diversity makes us stronger. Our differences are something we should and will celebrate.

Once an Eagle, Always an Eagle!