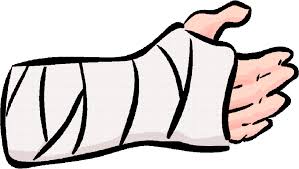 In the past couple weeks, people may have noticed the CHS principal, Mairi Scott-Aguirre, with her arm in a sling.  She broke at least two bones in her arm when she was cross country skiing at Teacup Lake earlier this month.

The day before Scott-Aguirre went skiing, it had rained and the rain turned to ice overnight.  When she was skiing, there was a piece of ice in the track causing her to be knocked off of it.  She fell and tried to catch herself, instinctively, and landed on her arm in the process. She has skied since she was 12 years old so she is knowledgeable about skiing and enjoys it.

Scott-Aguirre said, “I’m doing pretty well.  I’m not in much pain. It’s hard to do some things.  I’ve fallen before but I’ve never broken anything.”

She had surgery the week of February 10th and her arm was put into a splint.  She thought that she would be out for about a week but wasn’t sure on the recovery time.  After she recovers, Scott-Aguirre wants to ski again.